How citizens can file complaints on Everman Police Officers or Employees and How those complaints are handled. 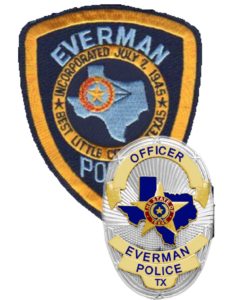 THE IMPORTANCE OF YOUR COMPLAINT

The Everman Police Department recognizes that its employees are responsible for their conduct where the public is concerned. The department also acknowledges that, at certain times, conflicts between citizens and agency employees can arise. It is essential to the safety of our community that the relationship between police and citizens be built on confidence and trust. Law enforcement cannot be effective without this vital conviction by both entities.

Police Officers must be free to exercise their best judgment and initiate proper action in a reasonable, lawful, impartial manner, without fear of reprisal. At the same time, they must observe the rights of all people. The complaint process and appropriate disciplinary procedures not only subject agency members to corrective action when they conduct themselves improperly, the guidelines also protect them from unwarranted criticism when they discharge their duties properly.

A disagreement over the validity of a traffic citation is not a complaint. Such disagreements should be directed to the court that has jurisdiction in the matter.

The Everman Police Department realizes that confusion, different perceptions, or the timeliness of information sometimes will result in descriptions that produce different versions of the same incident. Beyond legitimate error, however, the deliberate making of a report that the complainant knows to be false or misleading could constitute a violation of State law.

The complaint process is designed to deal with each case factually and fairly. Citizens who file complaints are treated respectfully, and their accusations are taken seriously. All complaints are investigated thoroughly, and all findings are based on impartial evidence gained through the investigation.

However, many complaints can be explained satisfactorily by a visit or a telephone call to the employee’s supervisor, usually the Patrol Sergeant for officers and Captain for administrative personnel. The supervisor will talk with you about your complaint and try to resolve it.

The Chief of Police is usually available Monday through Friday 8:00 A.M. to 5:00 P.M. to discuss your complaint about any member of the department.

There are two classes of complaints. The first and most serious is a Class I complaint, alleges the violation of a law or such other serious allegations as excessive force (being hit, slapped, kicked or struck by any object) causing pain or visible signs of bodily injury. The second, a Class II complaint, includes allegations of a less serious nature and may concern violations of the department policy.

It is the policy of our department to aggressively investigate suspected violations of the law. Officers are strictly prohibited from engaging in biased-based (racial) profiling. Please view our current policy.

Complaints must be submitted in writing to the Chief of Police or his designee and must include:

The complaining party shall receive notice of the disposition of the complaint within a reasonable period of time.

Any complaint can be made anonymously without giving your name. However, you cannot be informed of the internal review’s results if you choose to remain anonymous. After a thorough investigation, the complaint will be classified into one of the following dispositions:

Unfounded – Incident did not occur, or affected employee was not involved.

Exonerated – Incident occurred, but actions taken were lawful and proper.

Not Sustained – Insufficient evidence exists to prove the allegation.

Sustained – Evidence is sufficient to prove the allegation.

Although employees named in the complaint will at some point be required to respond to the specific allegation, they are not permitted access to cases under investigation. Complainants need not be concerned that they will be subject to retribution for legitimately stating a complaint because procedures are in place to prevent this.

FINAL DETERMINATION ABOUT THE DISPOSITION OF ANY COMPLAINT WILL BE MADE BY THE CHIEF OF POLICE.

As we recognize that conflicts between citizens and agency employees can arise, we also realize that there are times when employees go above and beyond their call of duty. Law Enforcement employees, like everyone else, appreciate it when their good deeds are noticed. Too often they are remembered for the traffic ticket they issue or an arrests they have to make, and not for the thousands of helping hands they extend.

If an Officer or Employee of the Everman Police Department provides services that you feel they should be commended for, please write the Chief a letter or note to that effect, giving your feelings on what the Officer or Employee has done that deserves commendation. The Chief will see that it gets to the employee and that a copy is placed in the employee’s personnel file. This boosts their morale and encourages them and all other Officers and Employees of the Department to be more positive about themselves and the service they provide. We are proud of the good relationship we share with the community.

Our Mission is to provide a Safe Community where citizens can live, work and raise their families without fear of crime. We will seek out and prosecute those who disobey our laws of our land. We choose to do this with Integrity, Courage, Courtesy, Fairness and Compassion.

COMMENDATIONS OR COMPLAINTS MAY BE DIRECTED TO:

or by e-mail to:   cspencer@evermantx.net